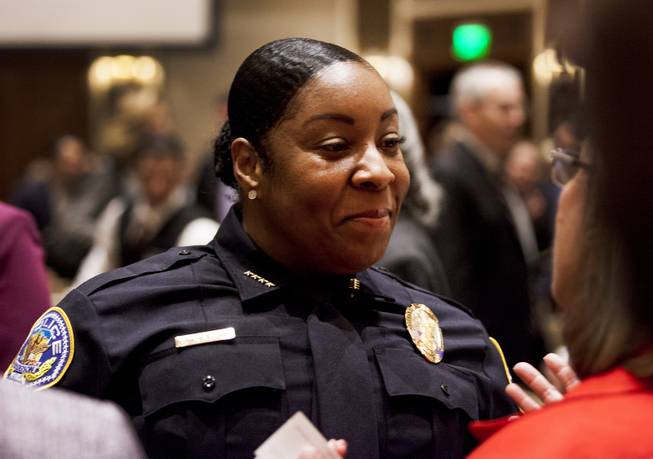 Former Henderson Police Chief LaTesha Watson is shown at the Henderson State of the City address on Jan. 10, 2018.

Former Henderson Police Chief LaTesha Watson’s claims of racial discrimination before her firing will be vindicated, according to one of her attorneys, who on Wednesday responded to comments from city officials suggesting his client was let go due to incompetence and disciplinary shortfalls.

“A fundamental reason they didn’t react well is because she is a Black woman,” Attorney Marc Cook told the Sun about Watson’s fit in the department. “That is unfortunate, but it is the reality. And when all the evidence is in on this case, we’re going to see the reality, and they’re going to have to explain why they lied about that reality for over a year now.”

“Unsubstantiated claims of racism and discrimination were presented by former employee LaTesha Watson only after she was terminated by the city of Henderson on April 11, 2019, for disciplinary reasons,” a Henderson spokeswoman said last week in response to the lawsuit.

But before Watson was fired, Cook said he had sent a letter to Henderson officials in which she reported the alleged harassment and called for an investigation. “They responded to it, so I know they got it,” he said.

In March 2019, when Watson was placed on administrative leave before her firing, she told the Sun that she believed race and gender played a role in her eventual exit. Her 16-month tenure, she said, was marred by resistance from the unions, department colleagues who resisted her orders, or city officials, who despite bringing her in as an “agent of change,” pushed back on her decisions.

In the lawsuit, Watson and her lawyers expound on those allegations, which they claim weren’t probed by the city.

They include officers posting “disparaging” comments about Watson on a racist website, a police union president allegedly saying, “I want this Black b—- out of here and we need to find complaints against her,” and her teenage daughter being followed home from school by unidentified uniformed officers, according to the complaint.

In a meeting with Watson and her supervisors, union leaders complained about her wearing business attire and her hair “down and curled,” the complaint said.

In 2018, Henderson hired an independent law firm to probe 10 complaints made against Watson, which cost the city more than $50,000. The allegations did not amount to any policy violations, although the report’s author noted that “it is more probable than not that there is a serious morale issue amongst supervisory personnel at (the department).”

“The city has extensive documentation, including investigations by an impartial third party, that overwhelmingly establish that Ms. Watson’s job performance was unsatisfactory, and she was not qualified to lead the Henderson Police Department,” according to the city’s statement last week. “Ms. Watson made poor and ineffective leadership decisions and created distrust and division within the organization. The city’s expectations for team members in a leadership role are to demonstrate professionalism and to work by the city’s fundamental values of integrity, collaboration and excellence.”

Cook, Watson’s attorney, said he believes the city’s position is a strategy to “save face.”

He said: How could Henderson cite incompetence when she’d received favorable reviews from her supervisors during her tenure, including the highest raise they could offer? How can Watson’s leadership be called into question when her reforms remain in place?

He also noted that Police Chief Thedrick Andres — whom Watson recruited, hired and trained — was promoted to her position.

Cook said the lawsuit aims to prove the city worked to “defame” Watson by leaking documents to the press after her firing that only his law firm and city officials were privy to.

As Watson applied for jobs across the U.S., reports out of Henderson barred dozens of prospective employers from hiring her, Cook said, noting that the lawsuit also aims to clear her reputation and seek compensation.

Watson, who was hired in May as the director of the Office of Public Safety and Accountability in Sacramento, Calif., is a “very strong, intelligent woman. She’ll be fine. But there’s a process you have to go through when you’re victimized,” Cook said.