SportsPulse: As the Titans still deal with their COVID-19 outbreak and the Patriots come to grips with multiple positive test, Mike Jones explains how the virus’ incubation period is showing cracks in the NFL’s safety protocols.

NASHVILLE — The NFL and NFLPA are conducting an investigation into whether the Titans violated COVID-19 protocols that, as of Saturday morning, was still ongoing.

Until its conclusion, coach Mike Vrabel is holding back from comments pertaining to the investigation.

“With all questions that are going to relate to the review, we’ve been completely transparent with the NFL, with the NFLPA, during this entire process, and we’re going to wait for their summary before commenting further on any of those discussions,” Vrabel said Saturday, his first time talking to reporters since Tuesday.

The Titans, dealing with the NFL’s first teamwide COVID-19 outbreak, have now had consecutive days of clean test results. On Saturday, they returned to their team facility for the first time since it was forced to close on Sept. 29, when the outbreak first came to light. 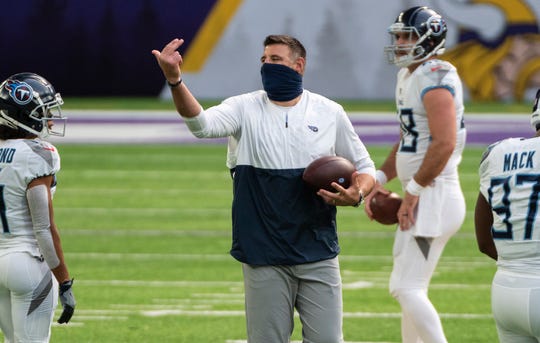 Among the potential violations the NFL and NFLPA are looking into: an informal workout by a group of players on Sept. 30 that took place at a local school. It occurred a day after eight members of the Titans tested positive.

Montgomery Bell Academy headmaster Brad Gioia confirmed to The Tennessean on Wednesday the Titans worked out together at the school.

Quarterback Ryan Tannehill echoed Vrabel’s response, saying he would wait until the NFL and NFLPA’s review had concluded before commenting on the timeline of events.

Tennessee on Saturday returned no positive coronavirus tests for just the fourth time in the last 12 days, a person with knowledge of the situation confirmed to The Tennessean. The person requested anonymity because no official announcement had been made. Two straight days of only negative test results has the Titans’ scheduled 6 p.m. Tuesday kickoff at Nissan Stadium on track.

The Titans-Bills game was originally scheduled for Sunday before the COVID-19 outbreak, the first to hit an NFL team, forced the league to postpone the game for a second consecutive week.

The Titans-Bills game would represent the NFL’s first Tuesday game since the Vikings played the Eagles on Dec. 28, 2010, in Philadelphia. A blizzard delayed that originally scheduled Sunday game. Before that, the NFL hadn’t had a Tuesday game since 1946.

Reach Erik Bacharach at [email protected] and on Twitter @ErikBacharach.