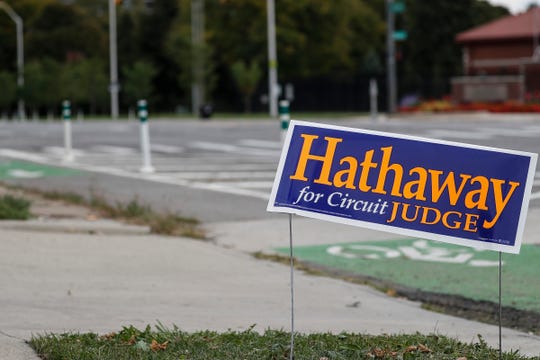 After 39 years as a Bobak, a Wayne County lawyer added “Hathaway” to his last name a month before launching his campaign for judge.

On Nov. 3, Nicholas John Bobak Hathaway, 40, hopes to win a seat on the bench in a court he once sued for discriminating against him as a white man.

If his new surname sounds familiar, it should. Over the last 20 years, by blood or by marriage, at least 10 members of the Hathaway family have served as Wayne County Circuit Court judges.

There are currently three Hathaways serving on the Wayne County bench — four, if you count retired judge Michael Hathaway, who is still hearing cases as a visiting judge brought in to help with the county’s considerable caseload. Judge David Groner, the husband of retired Wayne County Judge Amy Hathaway, is also on the bench.

Nicholas John Hathaway, as he calls himself on his campaign website and in online campaign ads, is technically Nicholas John Bobak Hathaway. That became his legal name after he completed the process of adding the surname of his wife, Wayne County Circuit Judge Dana Hathaway, to the end of his given name on Nov. 20, 2019.

Less than a month later, on Dec. 18, 2019, he created The Committee to Elect Nicholas John Hathaway.

“I changed my name to honor my wife,” he told the Free Press. “If I had a nickel for every time an attorney asked me ‘Are you going to change your name and run for judge?’ I wouldn’t need a job.

“This is a decision we made within the bounds of our family and our marriage.”

He declined to discuss the matter further.

More: Michigan ballots postmarked by Nov. 2 must be counted in election, judge rules

What to know:Detroit is looking for Election Day poll workers

Nicholas Bobak married Dana Hathaway about 20 years ago. She was elected judge in 2012.

In 2014, they filed paperwork to take each other’s surnames — which would have created the Bobak Hathaway family — but they did not complete the process. Court records show the case was dismissed in April 2016 “for lack of progress … parties having failed to appear.”

When Nicholas Bobak returned to court last year to add Hathaway to his surname, Dana Hathaway opted not to apply to add Bobak to her surname.

Bobak, as he was known at the time, had been working as a referee in the court’s Family Division since December 2009. Referees are not judges, but they hear and rule on cases involving juveniles. He had previously worked as an assistant Wayne County prosecutor, a job he took shortly after graduating from the University of Detroit Mercy School of Law in 2005.

His lawyer argued in the lawsuit that Bobak “has performed his job as a referee in an exemplary fashion” and said “to better himself, he applied for several positions, which would have been promotions.”

But, the lawsuit continued, “the court has refused to even interview plaintiff despite his stellar qualifications, but rather hires less qualified African-Americans.”

A cornerstone of Bobak’s case was an Equal Employment Opportunity Plan (EEOP) Utilization Report issued in October of 2016. The U.S. Justice Department describes such documents as “a workforce report that some organizations must complete as a condition for receiving Justice Department funding. … The EEOP’s purpose is to ensure that recipients of financial assistance from the Justice Department are providing equal employment opportunities to men and women regardless of sex, race or national origin. Federal regulations establishing the EEOP requirement also link a diverse workforce to effective law enforcement.”

The report said the court would “attempt to recruit” white and Asian men and women to correct the situation.

Bobak’s lawsuit asked for “economic damages, including back pay and front pay” as well as “non-economic damages to compensate for the mental and emotional distress, outrage, and humiliation he has suffered, and continues to suffer, as a result of the court’s illegal actions.”

On May 30, 2018, U.S. District Court Judge David Lawson dismissed the case with prejudice, meaning it cannot be brought back at another time.

Bobak’s attorney Jim Fett said the case “was dismissed after he gave his deposition,” referring to Bobak.

Fett said Bobak authorized him to dismiss the case.

Neither Bobak Hathaway nor the court’s attorney would discuss the case with the Free Press. 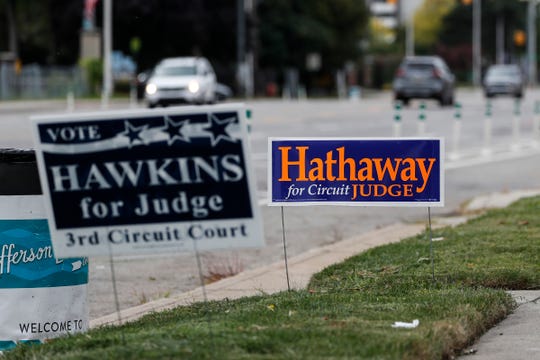 “The name is golden”

Bobak Hathaway is one of four lawyers competing for two seats on the Wayne County bench.

The Detroit Bar Association rated him as “qualified,” giving him a higher rating than Shakira Lynn Hawkins, who received “no rating,” but behind Chandra Baker and Mary Beth Kelly, who were rated “outstanding.”

“The voters don’t know one Hathaway from the other. … It’s a trusted political name, especially in the judicial category,” said Mario Morrow, who has managed local judicial campaigns. “You’re going to get two out of three votes just for having the name.”

“The name is golden,” he added.

Every county has names voters recognize, usually because they are associated with families whose members have been running for office for years.

Oakland County voters will see multiple Kowalls on their ballots in November. And while there is only one Gingell and Woodward serving on the county commission, Chairman David Woodward shares his name with one of the best-known streets in Michigan. The family of Michael Gingell, who preceded Woodward as board chairman, founded Gingellville in Orion Township more than 100 years ago.

Wayne County’s popular political names include McNamara, Youngblood, Evans and Callahan, but no family can claim more politicians in office at the same time than the Hathaways.

Greg Bowens, a consultant and former spokesman for Mayor Dennis Archer, said of Bobak: “Giving him the name Hathaway could give him the edge that he didn’t get from the bar ratings.”

Not every association with the Hathaway name is positive, however.

Bowens questioned why Bobak Hathaway wouldn’t discuss in detail his decision to change his name.

“There’s no reason to hide behind a statement on this kind of thing if what you’re saying is up and up,” Bowens said, questioning whether the name change was “a form of political expediency as opposed to doing something more noble or altruistic in claiming his wife’s family name.”

Bowens added that while it’s unusual for a man to take his wife’s last name, Michigan’s first-ever First Gentleman — Daniel Granholm Mulhern — picked up the surname of his wife, Gov. Jennifer Granholm.

And Bowens pointed out that former state Sen. Coleman Young Jr. was born Joel Loving II, even though he adopted the name of his father, the late Mayor Coleman Young, long before the younger Young entered politics.

Nevertheless, Bowens said questions about why Bobak Hathaway changed his name could diminish the benefit of adding a well-known political surname.

“It sounds nice and all, but it doesn’t really get to the issue, which is whether people should trust you running for judge,” he said. “He could have avoided all his by simply hyphenating his name or making it clear on his campaign website.”

Morrow said he doesn’t buy Bobak Hathaway’s claim that he only changed his name to honor his wife and her family.

“For a husband to change his last name to Hathaway after a number of years of being married,” Morrow said, “it’s obvious strategy.”

Still, it appears there are some things that even becoming a Hathaway can’t deliver.

Only four of the many Hathaway family members with judicial experience are listed among the endorsements on Bobak Hathway’s website.