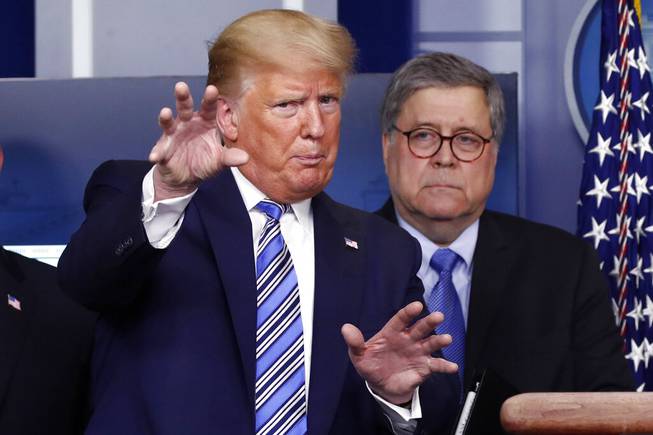 In this March 23, 2020 file photo, President Donald Trump talks during a briefing about the coronavirus in the James Brady Briefing Room, Monday, March 23, 2020, in Washington, as Attorney General William Barr looks on.

WASHINGTON — President Donald Trump is increasingly at odds with Attorney General William Barr over the status of the Justice Department’s investigation into the origin of the Russia probe, with the president increasingly critical about a lack of arrests and Barr frustrated by Trump’s public pronouncements about the case, according to people familiar with the matter.

Trump and his allies had high hopes for the investigation led by Connecticut U.S. Attorney John Durham, betting it would expose what they see as wrongdoing when the FBI opened a case into whether the Trump campaign was coordinating with Russia to sway the 2016 election. Trump has also pushed to tie prominent Obama administration officials to that effort as part of his campaign against Joe Biden, who was serving as vice president at the time.

But a year and a half into the investigation, and with less than one month until Election Day, there has been only one criminal case: a former FBI lawyer who pleaded guilty to altering a government email about a former Trump campaign adviser who was a target of secret FBI surveillance.

With time running out for pre-election action on the case, Trump is increasingly airing his dissatisfaction in tweets and television appearances. Barr, meanwhile, has privately expressed frustration over the public comments, according to a person familiar with his thinking. It’s not dissimilar to a situation earlier this year, when Trump complained publicly that he believed ally Roger Stone was getting a raw deal in his prosecution, even as Barr had already moved to amend a sentencing position of the prosecutors in the case.

Despite Trump’s unhappiness, there’s no indication Barr’s job is at risk in the final weeks of the campaign. Still, the tensions between Trump and the attorney general over the fate of the probe underscore the extent to which the president is aggressively trying to use all of the levers of his power to gain ground in an election that has been moving away from him.

This account is based on interviews with six people who have direct knowledge of Trump and Barr’s relationship. They were not authorized to speak publicly and spoke to The Associated Press on condition of anonymity.

Trump is also said to blame Barr for comments from FBI Director Chris Wray on election fraud and mail-in voting that don’t jibe with the president’s alarmist rhetoric. Wray has said there has not historically been any kind of mass voter fraud, whether through the mail or otherwise, a message at odds with Trump and Barr’s repeated efforts to sound the alarms about a process they claim is especially vulnerable to abuse.

Still, much of the uptick in tensions between Trump and Barr centers on the Justice Department’s handling of the Durham probe. A senior administration official said Trump feels like he’s given Barr wide latitude to advance the investigation, including declassifying documents related to Russia. In the absence of blockbuster findings, Trump is now moving to make documents public himself with his new acting head of intelligence.

On Thursday morning, Trump did not hide his displeasure in an interview on Fox News Business.

“Unless Bill Barr indicts these people for crimes — the greatest political crime in the history of our country — then we’ll get little satisfaction, unless I win,” he said. “Because I won’t forget it. But these people should be indicted. These are people who spied on my campaign. And we have everything. And I say, Bill, we’ve got plenty, you don’t need anymore. We’ve got so much.”

The comment followed an earlier barrage of presidential social media posts, including one in which Trump retweeted a doctored image of Barr superimposed with the late “Saturday Night Live” actor Chris Farley in character as a motivational speaker yelling at him. The caption: “for the love of God ARREST SOMEBODY.”

Since Durham’s appointment, he has cast a broad net in interviewing former government officials, including ex-CIA Director John Brennan. It is unclear when Durham plans to submit his report or how damning any of his final conclusions might be.

Even the outlines of the case involving FBI lawyer Kevin Clinesmith, who pleaded guilty in the Durham probe, were already known before he was charged. And the case against him didn’t allege any broader FBI conspiracy to go after Trump.

Barr has privately expressed frustration over the president’s public pronouncements on the Durham investigation. Though Barr is broadly in agreement with Trump on the need to investigate the origins of the Russia probe, he’s often bemoaned Trump’s lack of understanding about the intricacies of the legal system and the steps that need to be taken to complete an investigation.

A friend of Barr’s said there has been obvious “tension” between the president and the attorney general, and while Barr himself believes deeply in the importance of the Durham investigation and in the president’s authority to exercise control over federal agencies, he will not tolerate interference in specific investigations.

The friend said the Justice Department officials were eager for Durham’s work to be completed while Trump is still in office for fear the investigation would be shuttered in a possible Biden administration.

Trump aides had banked on the Durham probe being finished before 2020 election to lend credibility to Trump’s claims that his own investigative agencies were working against him. A report from the Justice Department’s inspector general in December knocked down multiple lines of attack against the Russia investigation, finding that it was properly opened and that law enforcement leaders were not motivated by political bias. But Barr has said he and Durham disagreed with the inspector general over whether the FBI had enough information to open a full investigation and, in particular, to use surveillance on a former Trump campaign aide.

Despite being close allies on a range of issues, tensions have flared between Trump and Barr at other points, including earlier this year when Trump was tweeting about Stone’s case. Barr later reversed a recommendation from prosecutors that Stone be sentenced to 7 to 9 years in prison, and critics argued he was doing Trump’s bidding.

Barr said in an interview with ABC News that the president’s tweets were making it “impossible” to do his job and told those close to him he was considering resigning. The two eventually patched things up.